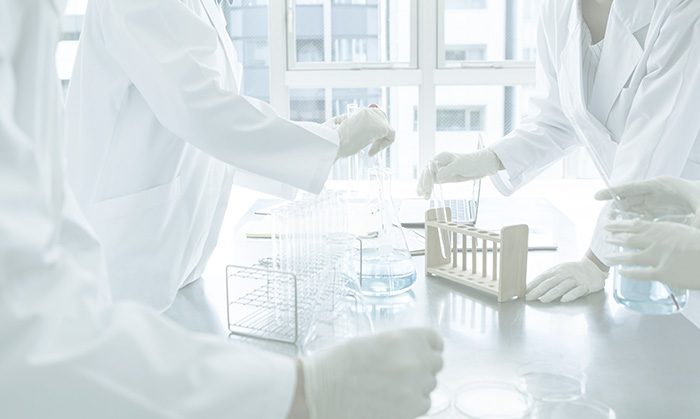 The Rosette AK Series was subject to clinical trials conducted by Masamitsu Ichihashi, Professor Emeritus at Kobe University. The following is an excerpt from a presentation that Dr. Ichihashi gave on the results.

Effects of Topical Preparations Containing Ceramide on Atopic Dermatitis
Excerpt from the presentation made at the 21st Annual Meeting of the Japanese Society of Pediatric Dermatology (held May 31, 1997 at the Sasakawa Hall)

■Summary
This study examined the clinical effects of the daily application of topical preparations containing glycoceramide (AK cream and AK lotion) for four weeks to target atopic dermatitis, particularly in dry skin areas. Effectiveness was reported at 65% (percentage of participants reporting that the preparations resulted in “some improvement” or better). Twenty percent experienced no change, while 15% of participants got worse. Meanwhile, no side effects were reported aside from mild irritation.

■Introduction
Though we do not yet have fully understood the pathological mechanism of atopic dermatitis (AD), it is an allergic disease mostly triggered by hereditary and environmental factors. It has been shown that the skin of patients with atopic dermatitis has a lowered function to protect itself from external irritation. In other words, the disturbance of barrier function is one characteristic of atopic dermatitis. In recent years, it has been discovered that AD is associated with a decrease loss of moisture retention in the stratum corneum, and that this is most likely caused by a reduction in ceramide and natural moisturizing factors. AD is frequently accompanied by dry skin, which is thought to directly exacerbate the condition by increasing itchiness and scratching. With this in mind, we would like to report our findings that the topical use of preparations (cream and lotion) containing glycoceramide has beneficial effects on recovery and maintenance of skin moisture leading to in treating atopic dermatitis.

Study design: between June 1, 1996 and April 31, 1997, twenty patients with atopic dermatitis (four mild cases, twelve moderate, and four severe) being treated at Kobe University Hospital Department of Dermatology were asked to apply a topical cream (Rosette AK cream, 0.5% ceramide) and lotion (Rosette AK lotion, 0.85% ceramide) 2–3 times daily. There were no changes made to their other treatments. Only one of the patients had been using a topical steroid, but had experienced no change in symptoms since they started using it over a month prior. Patient consent was obtained verbally.

■Evaluations
Evaluations were conducted four weeks after topical application began. Patients were asked to evaluate improvement in itching, redness, and scaling on a four-point scale ranging from zero to three (0: none 1: mild 2: moderate 3: significant). They also evaluated their overall improvement on a five-point scale (1: significantly improved 2: improved 3: somewhat improved 4: no change 5: condition worsened).

When the clinical study was over, participants were asked to answer to a questionnaire about their experiences using the topical preparations. The questionnaire asked about their overall usage experience and how well the preparations were absorbed, by evaluation of the scale of one to three (1: good 2: average 3: poor). They were also asked to rate stickiness, hydration, and refreshing feel on the scale of one to three (1: present 2: somewhat present 3: not present).

■Results
Figure 1 shows overall improvement. Ten percent of study participants reported significant overall improvement, 20% reported improvement, and 35% reported some improvement. This brought the total percentage reporting “some improvement” or better to 65%. Twenty percent reported no change, and 15% reported a worsening of their condition. Figure 2 shows the changes in scores for itching, redness, and scaling, and as you can see, topical application resulted in significant improvements in itching and redness. There was also improvement in scaling, but the difference was not as significant. Figures 3–6 summarize the questionnaire results. Most participants found the experience of using both the cream and lotion to be pleasant overall—far more than reported an “average” experience. None reported that the application was unpleasant. More people good absorption with the cream than with the lotion, but nobody reported that the absorption was poor. Most reported that neither the cream nor the lotion left a sticky feeling, though some did experience stickiness with both preparations. More people reported hydration and a refreshing feeling (present or somewhat present) for the cream than for the lotion, with some lotion users indicating that there was no hydration or refreshment.

■Analysis
Atopic dermatitis is typically treated in one of two ways. The first way primarily involves applying topical steroid hormones to control inflammation. The second way is the "skin care" approach, which involves keeping the skin clean and protecting it from drying out by keeping it as healthy as possible to maintain its barrier function. Skin affected by atopic dermatitis is generally dry, a condition that is known to be caused by a loss of moisture in the outer skin layers (stratum corneum). It is reported that the lipids existing between stratum corneum cells—particularly the sphingolipid—have a low ceramide content. The lack of ceramide is likely the result not of an increase in ceramidase, but of a reduction in sphinomyslinase (SMase) (which makes ceramide) and an increase in sphingomyelinacylase (SMacylase), which metabolizes sphingomyelin not in the synthesis for ceramides but in the synthesis for sphingosylphosphorylcholine. This loss of ceramides is one of the factors behind the dry skin associated with atopic dermatitis, making the topical application of a preparation containing ceramides a fitting treatment for the condition. Atopic dermatitis is also characterized by an increase in trans-epidermal water loss (TEWL). One of the reasons for this is the reduction in natural moisturizing factor in the stratum corneum in patients with this condition. The preparations used in this study contained glycoceramides and thus performed a moisturizing function; however, these are not normally present in the stratum corneum. They are thought to be converted to ceramide in the outer layer of the skin. We concluded that the topical preparations containing ceramides were shown to clinically reduce the redness, characteristic marker of inflammation, and scaling associated with atopic dermatitis while controlling itching, and are thus thought to be effective in controlling the symptoms of the disease by supplementing the lost ceramides.

This site is for healthcare professionals.

Are you a medical personnel?